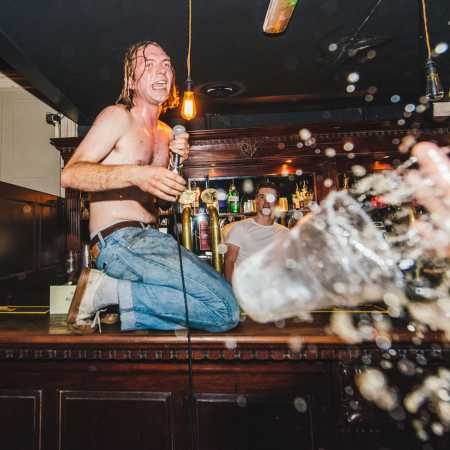 When a Chicago native with Italian-Spanish roots, from a family of military veteran and nurses James Cicero dissolved his relatively successful band indiepopovou Light Pollution, already had a plan in his head on a solo to create: a simple pop songs, played at home on his favorite electric organ only with automatic drummer, no štrejchy with the technique of singing, recorded without editing via the application directly into the iPhone. All released under the moniker Jimmy Whispers, which he earned as a shy kid. With the plate’s debut but eventually played all 4 years allegedly. Meanwhile, his wild one-man-show in Chicago clubs have become a local sensation, which Jimmy fueled a quirky campaign, when city streets adorned with graffiti. The mysterious logo Summer In Pain you are said to be able to see his time on every corner. And so what the Board last Summer In Whispersova Pain is? Definitely quick but surprisingly hearty blend of pop hitovek, with catchy melodies, that they immediately into memory, and with lyrics recorded with odzbrojuící frankness Jimmy emotional States with all ups & downs. As a former actor Jimmy interlaces songs (myself) ironizujícími comments and černohumornými jokes like Andy Kaufman. While the Spin listening experience the Board described as “beach party with Daniel Johnstonem”, the magazine of the Pitchfork review appreciates Jimmy ability with minimal resources to achieve maximum impact. Consequence of Sound Server donated by the findings that Jimmy is “song dance man that & can't sing nor dance, but what it certainly has, that are hits”. – Translated by Automatic service