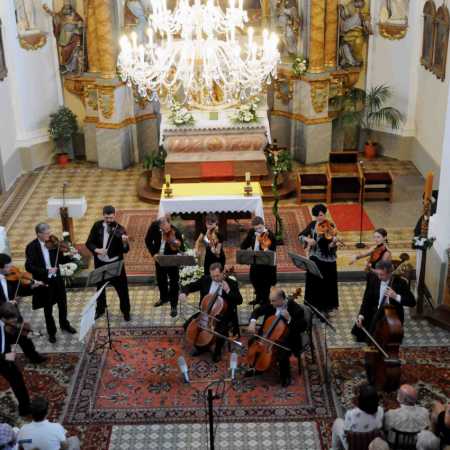 Moravian Chamber Orchestra founded Zbyněk Mrkos after his arrival in Brno in 1948. Until then, Brno chamber orchestral concerts through casual-formed files. Establishment of the Czech Chamber Orchestra and then the Moravian Chamber Orchestra had in his time extraordinary importance: anticipated the present practice of permanent orchestral chamber music files integral part of life. These orchestras sift and refine the player’s art and his tone and style culture, enrich tool-combination possibilities, and thus inspired the composer to the peculiar creative action.

After Zbynek Mrkos led Moravian Chamber Orchestra Alois Vesely. Since 1990, he headed the file as a conductor and playwright Rudolf happy. He used his studies in conducting with Josef Veselka, his long career with the guidance of an amateur symphony orchestra in Zagreb, as well as lifetime experiences primarius Moravian Quartet and violin teacher. Rozvíjíel work Moravian Chamber Orchestra on a highly professional level.

The orchestra successfully performed not only at home, but i was welcomed in the well-known cultural centers abroad, such as in Bayreuth, Nuremberg, Dijon, Stuttgart and Berlin. The competition Concerto Bohemia won first prize.

In 2006 the prof. Rudolf Happy art file management and baton to his disciple of yam Richard Kružík. – Translated by Automatic service