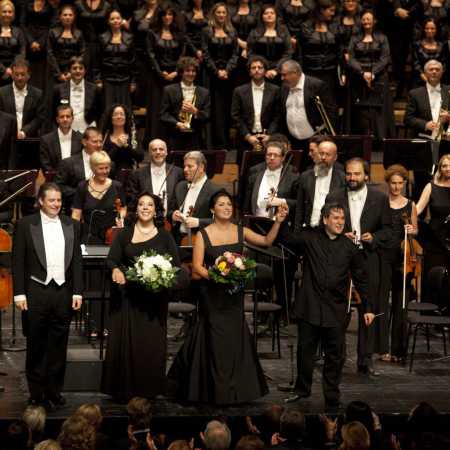 The Orchestra is an ensemble with a long tradition, founded in Rome in 1908 as the first Italian orchestra intended exclusively for performance of symphonic repertoire. Its first chief conductor was the famous Bernardino Molinari, who headed the ensemble until 1944. The orchestra gave the world premieres of many important works of the twentieth century including Respighi's The Fountains of Rome and The Pines of Rome. During its more than a century of activity the ensemble has worked with many of the most important conductors of the world including Arturo Toscanini, Wilhelm Furtwängler, Herbert von Karajan, Georg Solti, Carlos Kleiber, Claudio Abbado, and Riccardo Muti. From 1983 to 1990 its honorary president was Leonard Bernstein. The orchestra performs in such prestigious concert halls of the world as Vienna's Musikverein, the Concertgebouw in Amsterdam, London's Royal Albert Hall, the Pleyel Hall in Paris, and Suntory Hall in Tokyo. Its extensive discography includes many highly-acclaimed recordings of which we might mention at least Verdi's Requiem, Puccini's Madama Butterfly, Rossini's Stabat Mater, and Britten's War Requiem.