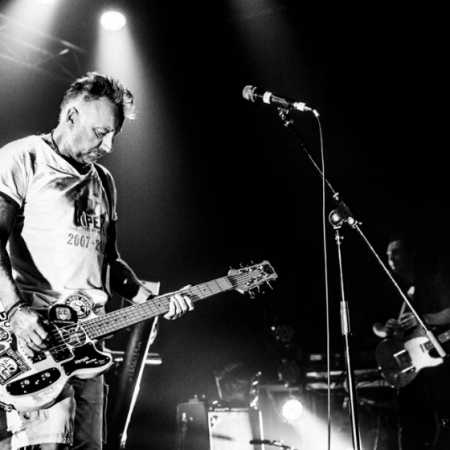 Peter Hook & The Light  Pictures In My Mind

The groundbreaking sound of the influential English groups Joy Division and New Order always dominated the bass lines of Peter Hook. In the second half of the 1970s to allow the typical bass guitar Hookova Joy Division to create masterful pieces of real despair. Even when they are depressing lyrics of Ian Curtis and his singing is often considered as the main distinguishing sign of mourning music of Joy Division, many of the songs the band was just Hookova ominous throbbing bass guitar. Hookova technique of playing on the bass guitar have always stressed the importance of rhythm in punk rock and inspired a whole generation of dance-oriented bands novovlnných.

After the suicide of Ian Curtis on May 18, 1980, Hook with the other members of Joy Division created by New Order. On the first album, entitled “the New Order Movement in two songs sang (” Dreams Never End “and” Doubts Even Here ") and his style of playing the bass guitar became more musical, when the band developed the use of sequenced synthetic sounds. He also played on the keyboards and electronic drums. Between Power, Corruption and Lies Low-& life Hook on the participoval short project Ad Infinitum with the Lindsay Reade (then wife of boss Tony Wilson’s Factory) and members of the Stockholm Monsters-released a cover version of the song, Joe Meeka “Telstar.” In 1990, after the New Order released the Technique, Hook formed the project’s Revenge and issued the One True Passion. Cooperation with Dave By (guitar, keyboards) and Chris Jones (keyboards), which fused elements of techno and the scene; Hook also sang. The second album, 1992 's Revenge Gun World Porn came out before the New Order released in 1993 album Republic rove.

After the suspension of the activities of the New Order, Hook teamed up with singer David Pottsem (who started singing in Revenge after their debut) and released Music for Pleasure as Monaco in 1997. The song “What Do You Want from Me?” became a hit in clubs and on alternative radio. Monaco broke up due to the indifference of gramofirmy and their second album was released with a delay to Monaco in 2000. .

Hook remained musically active and in the new millennium. He recorded two more albums with the New Order (Get Ready and Waiting for the Sirens ' Call) and left the band in 2007. Its bass sounded on the recordings of other artists, such as Perry Farrell, the Hybrid, and the Crystal Method. Freebass, a band with two other basáky-based Andy Rourke (the Smiths) and with Mani (the Stone Roses). They released a few EP and album in 2010, It’s a Beautiful Life). Peter Hook and the Light originated, to live where they performed two important albums, Joy Division Unknown Pleasures and Closer. In 2011, the band releases EP 1102/2011 with a version of the song “Atmosphere” Joy Division sung by Rowettou. Unknown Pleasures: Live in Australia is based on roughly at that time. Hook worked as a DJ, compile The Hacienda Classics and The Hacienda: Acid House Classics and even wrote the book How Not to Run a Club. – Translated by Automatic service