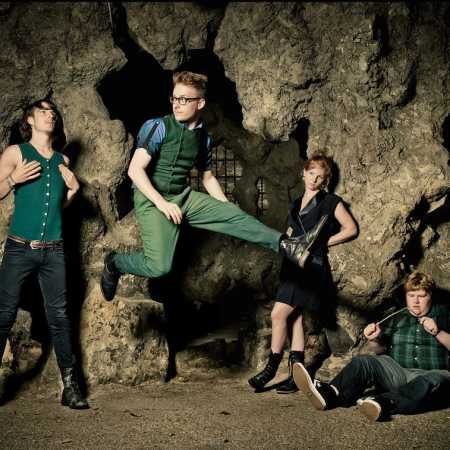 School is Cool  The World Is Gonna End Tonight

The name of this Belgian band is reminiscent of some very gripping product from the factory to television serials painkillers. Maybe we looking at the members of the group found parallels with how such a sitcom writer is an average student parties, including fatty agile class.

But now we have this misguided comparisons chop off! This band plays alternative baroque pop punk and widely šmrncnutý electronics and their concerts are far from television boredom accompanied chroustáním chips.

School Is Cool originated in Antwerp, Belgium in September 2009. Rocket start them after four months of secured victory in the most important Belgian rock contest Humo’s Rock Rally, which published many of the stars of the European format, such as dEUS, Das Pop or The Black Box Revelation. As a fresh wind whistled Belgian countless festivals, including the most important ones such as Genk On Stage, Boomtown, Dranouter, Marktrock, Maanrock or Pukkelpop.

One of the best live bands currently Belgian released in 2011 his debut album Entropology. It contains 16 songs blending energetic drums with synthesizer sounds and osmdesátkovými almost cathedral choirs with dark, sometimes almost apocalyptic texts. Their basic philosophy remains extremely intense and energetic concerts, in which the School is Cool to add to the arrangement baroque punk fury. In addition to Belgium passed and the Netherlands, Switzerland, Austria, Germany and France, and played a showcase festivals such as Eurosonic, The Great Escape or Popkomm. – Translated by Automatic service