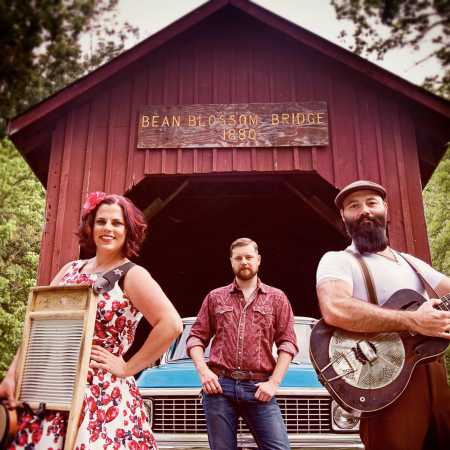 4:30 2 ×
The Reverend Peyton's Big Damn Band  Between The Ditches

The Reverend Payton's Big Damn Band is a three-piece band from Indiana, playing a mixture of blues, country, folk, and ragtime, říznutou punk and rock music. The band is based on the traditions of the delta blues and country, but by combining with the more modern styles, non-traditional and private access pushes these genres into a completely different dimension. This approach are a new generation of Blues fans from around the world. The band, however, does not lose its authenticity, and literally draws inspiration from her surroundings. The couple live on the farm Paytonovi, surrounded by forests, and this environment of their songs literally gushes. "Some people do not believe that we really, as she sings in our songs. But it's true. Breezy and I got really happy. We're trying to do things just as well as they do the people in Indiana since time immemorial. And do we really live in the Woods and hunting for food. ", explains the Rev. Payton.

The main character of the band is the Reverend j. Payton, who is also the author of most of the songs. On stage stands out with its archival guitars-rusty National guitar slide from the year 1930, the wooden Trojan Resonator Guitar from 1934, and copies of the acoustic guitars Gipson of 1994. Is the main representative of the so-called. "ofFinger" style, when can one moment to play with the thumb and fingers of the bass line guitar melody. Macy's is his harshly honest to dřevorubecký vocal performance.

His wife, Washbord "Breezy" Payton, is a champion in the game on a washboard for laundry. The tool adds a band characteristic sound and energy. Breezy playing the washboard in golf glove with sewn thimbles. Her style is so aggressive that after each concert sells fans burned and broken parts of the washboards as a souvenir.

Ben "Bird Dog" Bussell in the band playing on a modest report drum to which it belongs and the five gallon plastic bucket. The band claims that it is the only in the world, which has closed – Translated by Automatic service