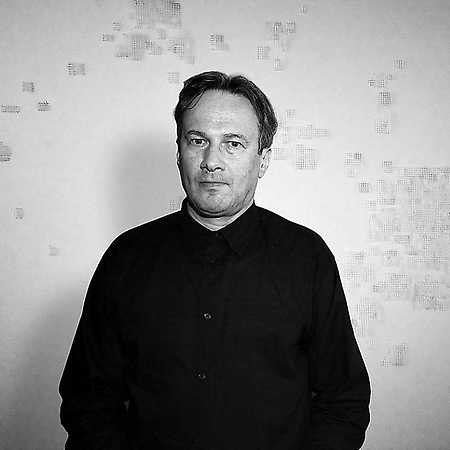 Václav Krůček is one of the significant Czech artists who re-emigrated during the 1990s. Today, Krůček commutes between Prague and Sydney. He resigned to the narrative and fell for the optical, visual quality of abstract painting. He graduated from the Academy of Fine Arts in the late 1970s and lived in Australia and later in the United Steaks from 1987.

Krůček’s oeuvre is based on visual effects instead of colors, while his experiments take him as far as to the edge of visibility of “visual” works, for he apparently employs the phenomenon of intuitive viewing. In the early 1990s, he fell for the visual quality of a shadow cast by white structural pattern hung on a wall. The light-and-shadow drawings were, more or less accidentally, followed by reflections of light when Krůček came to shoot wall reflections of light beams cast by a shiny foil. He was fascinated by the randomness of the images of light, which is solely given by laws of physics but also edges on the metaphysical. Krůček participates at exhibitions all over the world and his works are part of many collections.