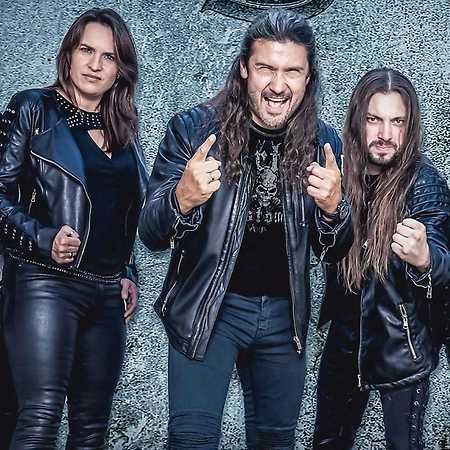 The band Almanac consists of Victor Smolski (guitars, cello, sitar, piano, keyboards), Patrick Sühl and Jeannette Marchewka, bass player Tim Rashid and Kevin Kott on the drums. The V. S. in the logo of the band stands for Victor Smolski. So it can be read as Victor Smolski’s Almanac. The Russian magazine Classic Rock voted Victor Guitarist of the Year in 2005. Also the Japanese magazine Burrn! voted him many times in the Top 20 guitarist of the reader´s pop poll. He composed the song Straight to Hell for the German movie Schuh des Manitu. Almanac has signed a record deal with the world’s leading Heavy Metal label Nuclear Blast. Their debut album Tsar (2016) has entered the charts at the following positions: Germany #74, Swiss #87and was also nominated at the Metal Hammer awards as best debut album 2016. Almanac recorded their second single Kingslayer at HeyDay Studios in Wuppertal, Germany, which has been released 2017 via Nuclear Blast.