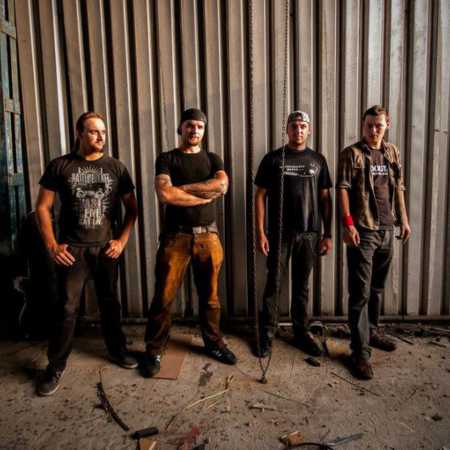 FC band Amores Perros was founded in 2005, frontman and singer of the Amores. Went through several personnel changes to the existing form of the 4 members (Amores, guitarist Joey, bassist, and drummer Johnny Rate).

The development of the music is more than noticeable. In October 2010, the band closed the Studio in Pilsen ExAvik, where she recorded a new EP, “you've got enough…” The baptism took place 4. 12.2010 in Pilsen in the Club under the lamp.

At the beginning of June 2012, after careful preparation and filing of the new material in the Studio closes the Pilsen ExAvik a second time, to record their third Studio in action.

The new album from previous distinguished not only by the creation of the songs and lyrics, the band contributed equally, but also new material absorbs from the classic punk-rock and extends into rock n rolovějších ´ ´ to metal waters.

In may 2014, the band began to record in the Studio ExAvik new LP album, which again experimenting with other styles such as. Funk, Metal, progressive rock like Pink Floyd and even Jazz. The new album sees the light of day in September 2014.

The band has had already several radio interviews, victory in the charts with the song on the radio Egrensis “4 Bats”, 1. instead of the Alternative TV with video clip “I'm cool” (http://www.youtube.com/watch?v=d9rW-sRtr8k), and finally participation in České Budějovice and in the semifinals of the tournament of music worldwide competition Hard Rock Rising 13.

In September 2014 after 2 years, the band is releasing new album titled WHAT THE FUNK?! . As well as on the previous album “4 Bats,” continued the band and on the news in the pursuit of stylish diversity. The Album “WHAT THE FUNK?!” contains a total of 11 disparate songs, in which the singing themselves significantly and other members of the group, including the drummer. Here the band experimenting with a variety of genres, such as. Funk, progressive rock, metal, or even jazz and so can come. The band also recorded a song by the clip on the trees, which can be see on the official website http://www.amoresperros.eu/.

The new album was recorded in the Studio of ExAvik, under the baton of sound master Paul Brom and mastering took care of Ing. Přemysl Haas in the study of Pyhäjärvi. The album “WHAT THE FUNK?!” is based on below by AVIK.

The album took place on Saturday 27. September in the Pilsen Theater Club under the lamp with the participation of dobřanské the band to a close. The album was christened: Alegna, owner of a recording studio ExAvik and guitarist of the band the Klatovy, Klatovy, Lord Paul, Brom, sound Studio ExAvik and Jiří Sláma, owner of the music label AVIK. – Translated by Automatic service