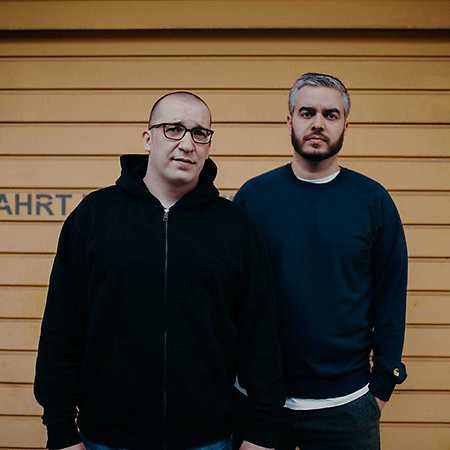 Audio88 & Yassin is a German hip-hop duo from Berlin. They have been making music together since 2009.
Audio88 and Yassin met through their mutual friend Soda, with whom Yassin lived together in a shared apartment. Through MySpace they contacted Audio88 and later met at an El-P concert. The first common track was Krieg ist cool. The two got along right away and in 2009 they released the joint album Zwei Herrengedeck, bitte!. A second part followed in 2010 and a third one Das Gleiche wie immer, bitte in the same year. All albums were released through Analog Audio as well as LP over HHV.de. They first performance was at the Splash!-Festival in 2010 .Another festival followed in 2012. In 2015 they released the album Normaler Samt, a reference to Blue Velvet the trend-setting rap album by Torch. It reached number 22 on the German album charts. In 2016 the duo’s fifth album Halleluja was released on their own label Normal Music. Guests on the album are Nico KIZ and DoZ9.