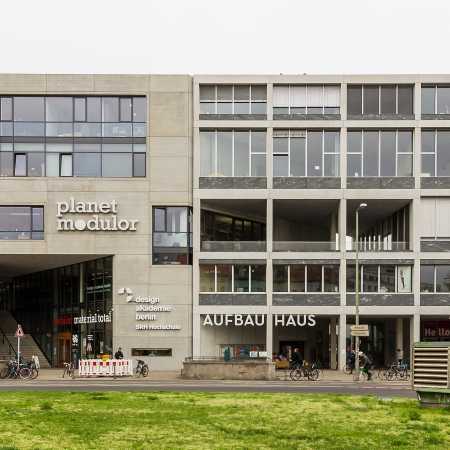 It has its name from the publishing company Aufbau Verlag that has its headquarter at Aufbau Haus since it opened in 2011.

Besides, the design academy Berlin is situated at Aufbau Haus as well as a several ateliers for printers, carpenters, tailors, gold smiths and architects. Next door, Minimum offers design classics for office and home. And on the rooftop children play at the kindergarten Wildfang.

Another special emphasis is given by the presence of five self organizations of the Romani people at Aufbau haus, amongst others the Documentation and Culture Center of German Sinti and Romani People.

Of course there is also a wide culinary offer: One café and three restaurant with international cuisine offer food and drinks. And in the nights, Berliners celebrate at one of the most popular clubs of the city: Prince Charles - at Aufbau Haus.