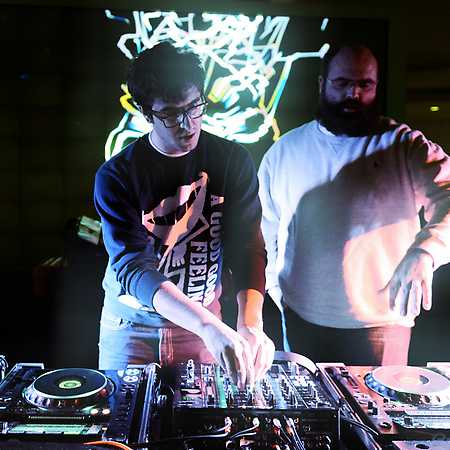 Beautiful Swimmers demonstrate the power of collaboration in club culture. The DC-based duo embraces an anything-goes approach to two-heads-are-better-than-one mixing.

They take the dark, disorienting environments of nightclubs and make them inviting, enveloping, coherent places. Through years of dedication to the culture, unwavering commitment to their craft, and an unimaginably diverse record collection, DJs Andrew Field-Pickering and Ari Goldman perfectly embody these virtues.

The pair first met in Washington, DC as teenagers, after their bands had played a show together, and were raised on the city's thriving punk and hardcore scene. Separately, they have both spent the past decade releasing music as Max D and Manhunter, but it wasn't until they started DJing as Beautiful Swimmers in 2009 that the pair emerged as the leading club culture proponent in Washington DC's close-knit music scene. This punk spirit has seen them playing music that surfs across genre boundaries and largely playing intimate parties with like-minded artists and promoters.

They smashed festivals from Dekmantel to Gottwood, played otherworldly radio sessions everywhere from NTS to Radio 1, and dropped the most roof-raising and diverse RA mix in recent memory, jumping wildly from forgotten UK garage jams to deep house grooves. As the B2B becomes an increasingly commodified trope in club culture, Beautiful Swimmers also showcase the transformative power collaborative selectors can have when they get it right.