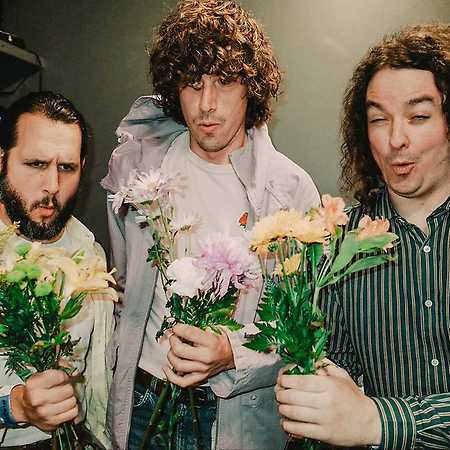 Midland-born, Toronto-based indie rock band Born Ruffians consists of guitarist/vocalist Luke Lalonde, bassist Mitch DeRosier, and drummer Steve Hamelin. They are proof that a group of friends with a tireless work ethic and fierce, grassroots commitment to their labour’s integrity and vision can still go a long, long way. After some local performances and a growing online reputation, the band was signed to the UK electronic music label Warp Records. They released their self-titled debut EP in 2006. It was recorded by Ryan Mills at Little King Studio (now Sleepytown Sound). They have received extensive airplay on CBC Radio 3 with their debut single, This Sentence Will Ruin/Save Your Life, as well as a cover of Grizzly Bear’s single Knife which the band recorded live on KEXP. In 2007, they released the single Hummingbird, which was included on their first album Red, Yellow & Blue. 15 years into their career, the trio isn’t slowing down. Instead, they’re doubling down on those designations with Juice, their 6th full-length record. It’s a collection of rock and roll songs, written and polished over a three-year span then sewn together into a cohesive and uniquely enjoyable experience. It’s Born Ruffians as they’ve always been: on their own terms, heads against the wind until their work is done.