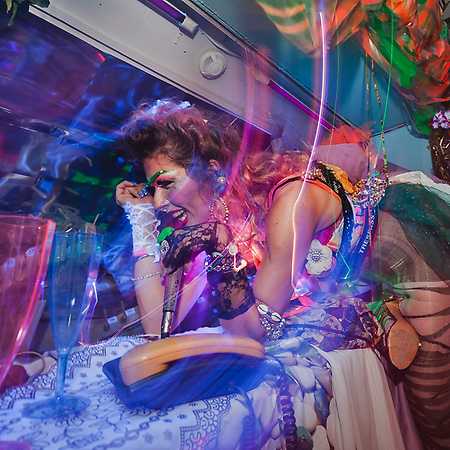 Cibelle, born Cibelle Cavalli Bastos in São Paulo, Brazil, is a visual artist and musician based in London, Berlin and São Paulo. They also perform under the [{""(})] moniker and graduated at the Royal College of Art in London in 2015. Cibelle has released four music albums and has performed and presented work in venues such as Martin-Gropius-Bau Berlin, Museo Reina Sofia Madrid, Carnegie Hall New York, and many others.

Cibelle has a conceptual, expanded field and interdisciplinary practice that includes thought production, performance, sound art, video, painting, sculpture and installation. Currently operating daily through social media stories under @aevtarperform, their work addresses the deconstruction and formation of identities and what stands in between the self and presence as our multi-selves interact with each other and our surroundings.

They attended the Marcelo Tupinambá Conservatory in São Paulo from the age of six, where they studied guitar, piano, percussion and theatre. They had a short career modelling in her teens, but left it to dedicate themselves to acting.

After meeting the Serbian-born producer Suba, they appeared as the main vocalist on his album, São Paulo Confessions, on Ziriguiboom in 1999. Cibelle next appeared on Celso Fonseca’s Natural album. Their first solo album, Cibelle, was also released in 2003. Signed to Belgian record label Crammed Discs at the age of 22, Cibelle started spending more time in Europe, specifically Paris. By the completion of their first album, they moved to London.

Their band is made up of around ten musicians or more who each get together as trios. Cibelle’s latest performances ranged from having two drum kits on stage, to having none at all.

Cibelle works by building tracks live on stage, with special guests and audience members contributing to a “bric-a-brac DIY” sound through vocals, playfulness and instrumental experimentation.