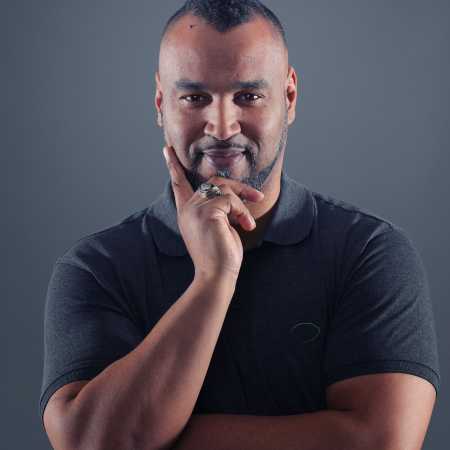 Patrick (Coach) Esume is the German expert on American football. Born and raised in Hamburg in 1974, he first played soccer but soon switched to American football, winning the German Bowl, the German Championship, the Euro Bowl, the World Bowl and the World Games on several occasions. First as a player, then as a coach. Esume has worked in various positions even for American NFL teams.

Since 2015, he has been a television expert on the football programs ran FOOTBALL and Coach’s Corner on the German television networks Pro7 Maxx and ProSieben.

In September 2017 Edel published Esumes autobiographical book Believe the Hype! American Football – mehr als nur ein Spiel, which directly went to No. 1 of the SPIEGEL bestseller list and the became the template for his nationwide stage program.

Patrick Esume is also an extremely popular speaker for keynotes and lectures, is booked as a talker for podium and panel discussions, as well as TV shows and acts as a social media influencer.