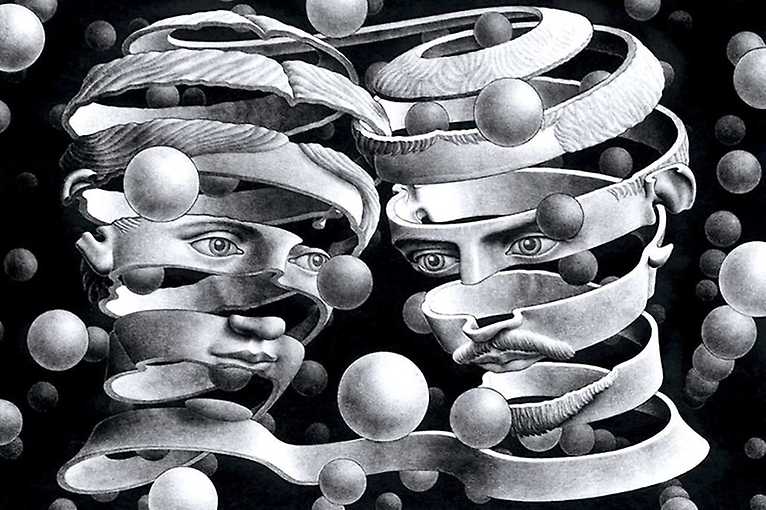 The fourth from a series of six lectures by the Art Transfer Foundation, devoted to the drawing and graphic works of artists who became virtuosos of the black line.

Born in the small town of Leeuwarden in the north of the Netherlands, Maurits Cornelis Escher spent his school years, which he described as hell, in Arnhem. Several decades later, he produced a number of graphic works depicting dramatic in mood versions of the staircases of the institution he so often climbed as a boy. The resemblance between the school staircase that still exists today and the structures known from Escher's graphics is remarkable.

He was supposed to become an architect, but chose the profession of an artist. In his adult life he combined travels, during which he sketched and came up with ideas for future works, with long stays at home, where, listening to Bach's music, he led an extremely orderly life. Particularly important were his two visits to the Moorish palace of the Alhambra in Granada, which led him to his later long-term fascination with pattern tessellation. In 1944, the artist wrote in a letter to his nephew: In the first place in my work I put the complementary regular division of the plane without rest. In all the drawings of the last few years I cover it completely with congruent figures, leaving not a single piece of free space; my drawings have no end and the same elements are repeated on them without interruption. Escher's work became very popular in the 1960s, as hippies marvelled at its supposedly 'psychedelic' qualities. However, when Mick Jagger wrote to Maurits asking for permission to use one of his works on the cover of the Rolling Stones' 1969 album, Through the Past, Darkly, Escher refused, informing the rock star's assistant: Please tell Mr Jagger that I am not "Maurits" to him.

Lecturer: Ewa Szachowska – art therapist, coordinator and author of educational projects and a long-term associate of the Art Transfer Foundation (since 2013).  She collaborates with the Museum of Modern Art on the Vistula River in the project Mature Wonderful. Conducts workshops, guided tours, lectures and various educational activities using the medium of art, dedicated mainly to adults, especially seniors, but also to people with disabilities and children. She is passionate about art history - both by education and by avocation. She deals with education through art and art therapy both from the conceptual and workshop side. She also conducts workshops and works as a guide in the Botanical Garden at the University of Warsaw.