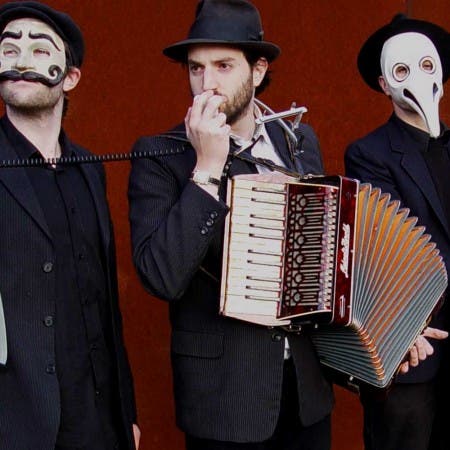 Daniel Kahn & The Painted Bird  Freedom Is a Verb

About Daniel Kahn & The Painted Bird

Daniel Kahn & the Painted Bird is a German-based klezmer band founded by the American singer, songwriter, and actor Daniel Kahn, originally from Detroit, Michigan. The band was formed in 2005 and is based in Berlin.

In the four years since Bad Old Songs (album that won the German Record Award similarly to the previous one), the Berlin-based, song poet from Detroit has formed the band with new and old friends and companions: The Berlin Klezmer-veteran Christian Dawid, with his arsenal of wind instruments (from clarinets to saxophone), makes The Painted Bird sound like a drunken Seeman’s band dissecting a Jewish wedding celebration. Jake Shulman-Ment leads his violin like a razor-sharp knife through the pieces, the proven drummer Hampus Melin provides percussive sounds and the necessary drive, Michael Tuttle beats the bass as usual furious and sensitive, and so the Painted Bird provide for the well-known and fascinating intensity of a Yiddish party, normally dominated only by Balkan bands or the unforgotten French viola.

Daniel Kahn, singer, guitarist and accordionist, is in great shape and has written some of the best songs of his career: The Butcher’s Share sounds like some sort of greatest hits compilation, except that these “greatest hits” are made of entirely new melodies. Sometimes funny, sometimes like a nightmare, sometimes sad, then wild again and challenging for dancing – this compilation of original pieces, translations and adaptations smuggles the songs across borders, be they languages, history, traditions, cultures or genres. Punk, klezmer, jazz, Brecht, Waits, folk ballads, everything is back.

The explosive mixture of klezmer, radical Yiddish songs, political cabaret and punk folk continues to be unparalleled. Pieces like Freedom Is A Verb and 99 tell us about the concrete moment as well as the eternal struggle between social class and liberation. Ballads like Children In The Woods and Sheyres Hora explore the depths of dreams and trauma, and the deep black song No One Survives recalls David Bowie’s courageous hopelessness in his last phase of life.