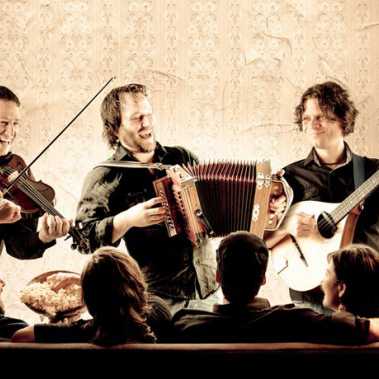 Trio De Temps Antan on the Quebec scene is one of the most famous groups. Won many awards and instrumental to their excellent album was nominated several times for Canadian Music Awards Juno Awards. Reputation power-trio was transferred to Europe. De Temps Antan in March 2013 fantastic concert put on major festivals Babel Med in the French port of Marseille.

Violinist and singer André Brunet, mandolin player and guitarist Éric Beaudry and accordion player Pierre-Luc Dupuis miraculous come from hatcheries famous Quebec band La souriante Bottin. Of strings, hair and bellows explosive trio literally smokes while incredibly kmitajícíma legs swirling dust. The rhythmic stomping the mat is replaced by percussion. Called quebecois podorythmie and represents a unique part of traditional Quebec music and the secret weapon of local groups. Among the only diversion in an otherwise harsh life of the French settling in the 16th century in what is now the province of Québec were dances. Musical accompaniment catered violinists, giving the dancers rhythm podupáváním, and if this is happening in barns with earthen floors, regarded them under foot wooden boards, while in the kitchen and sat down at a table with chairs. – Translated by Automatic service