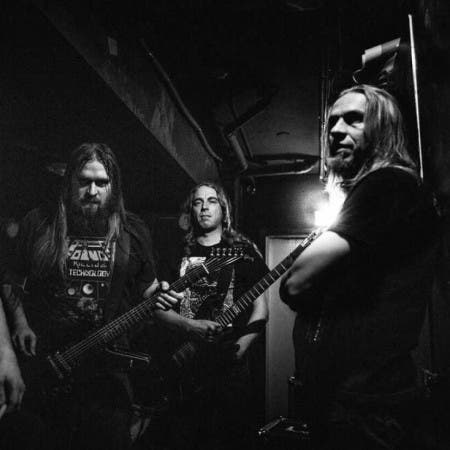 Demilich  When the Sun Drank the Weight of Water

3:24 1 ×
Demilich  And the Slimy Flying Creatures Reproduce in Your Brains

4:53 0 ×
Demilich  The Uncontrollable Regret of the Rotting Flesh

Demilich is a death metal band from Finland formed in the early 1990s and consisting of vocalist/guitarist Antti Boman, guitarist Aki Hytönen, bassist Ville Koistinen, and drummer Mikko Virnes. Their debut album, Nespithe, released in 1993, featured intricate death metal riffs with extremely low, gurgled vocals in the vocal fry register. The album contained long, complicated song titles and unconventional lyrics which were written in code in the booklet. It was featured in Terrorizer’s Secret History of Death Metal, in their list of “The 40 Albums You Must Hear”; they commented: "Even trying to scream your lungs out whilst vomiting a mix of Haggis, outdated goat’s cheese and kebab won’t do. Tested extensively by Terrorizer’s scientific team, we can now safely say that no normal human is capable of reproducing the effect-free vocal madness displayed by Antti Boman on these Finns' sole, totally unique, album