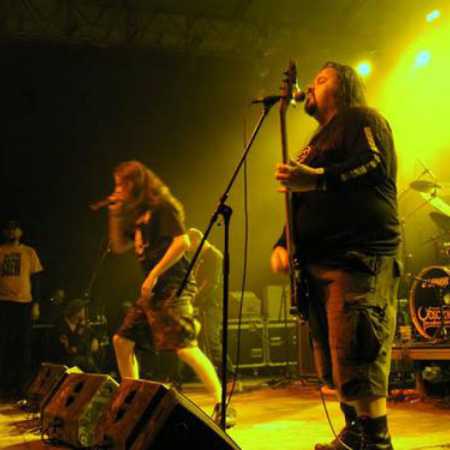 Grind/death metal band DISFIGURED CORPSE was founded in July 1991 in the composition of Ferenc (drums), Hadgi (bass), Tomba (guitar) and David (vocals). In this cast, the band recorded their first demo in May 1992 under the name of “Fall Down” In Reality ". In July 1992, came the offer from the company M.A.Bona on the rotation of the split CD with the band TOTAL DEATH (later CAROUSEL OF TEARS). Before the recording of this CD the band expands its range of second guitarist Pancha. In the autumn of the same year koncertuji DC with bands DEICIDE, ATROCITY, GOREFEST, etc. In these concerts he plays newcomer bassist Warry. His predecessor left the band Hadgi BIGOTRY (later the DISSOLVING OF PRODIGY). In December 1993, recording new material on the first D.C. independent CD under the working title “Disappointment”, which comes after a long period in 1996 with Sheer records under the name “Flash Of Pain”. After the recording of this CD is singer David. Replacement becomes Edwardo (formerly NEMESIS). In 1995, the band plays hard. Together with the SPOT SCARNIFICATE leave on a European tour. Worth mentioning is the předskakování bands DEATH and BENEDICTION. However, these concerts were held under the name of kráceným DISFIGURED. In the autumn of 1995, the DISFIGURED records a demo of “No Time To Waste,” which comes as a split cassette with SPOT SCARNIFICATE for Obscene productions. At the end of 1995, the disintegration occurs due to different musical opinions. Guitarist Pancho continues under the name of DISFIGURED, surrounded by new members. Their output, however, has nothing to do with the old production DISFIGURED CORPSE. In the spring of 1999, the DISFIGURED CORPSE gives all together in the new report: Hadgi (bass), Ferenc (drums), Tomba (guitar) and Edwardo (vocals). From June 1999 to perform regularly with a completely new repertoire. Stylish new tracks closest to grindcore, but the missions are also other music styles such as HC or even death metal. During March 2000, the band recorded in the Studio Barbarella new material under the working title “Mega-ultra-intergalactic-core 2000”, which comes after the publishing of the epidemic Records 15. 9.2000. To promote the album receive DISFIGURED CORPSE countless concerts, which include 2 tour. First, after the Czech Republic with HYPNOS and OBSCENITY SECTION. The second two weeks in Europe with the MALIGNANT TUMOUR. Dissatisfaction with the work of publishing the epidemic Records forced the band to go under the heading Crystal Prodictions. In November 2002, is the world’s third CD “United Hellland”. Guitarist Tomba leaves the band for personal reasons. In its place comes Maria (ex.G.O.R.E.) In addition to the concerts, also addresses family matters. One divorce, but more positive news is the fact that the family is growing about two DISFIGURED COPRSE small '. At the end of September 2004, should be to record a fourth CD, but because of the zvrtnuté limb Ferenc is a studio drummer postponed until January 2005. In the meantime, DISFIGURED CORPSE played nine-tour of the Czech Republic and Slovakia with PUNGENT STENCH, BEHEMOTH, HYPNOS and CHAOS IN the HEAD. In January, the band of the week moves to Bzeneckého Studio where he records Shaark new album “Mankind Collapse”, which comes out once again at the Crystal productions at the beginning of the summer of 2005. between what guitarist Michael dedicated to management of kamiňonu on a full-time basis, the rest of the kapelky into its ranks the Summoner’s new guitarist.And it is none other than Mara Marunič (Purulent Spermcanal, Have the Munchies).Getting started diligently practicing and perhaps soon we will see the new essay.Current report: Ferenc (drums), Hadgi (bass guitar), Mara (guitar) and Edwardo (vocals). – Translated by Automatic service