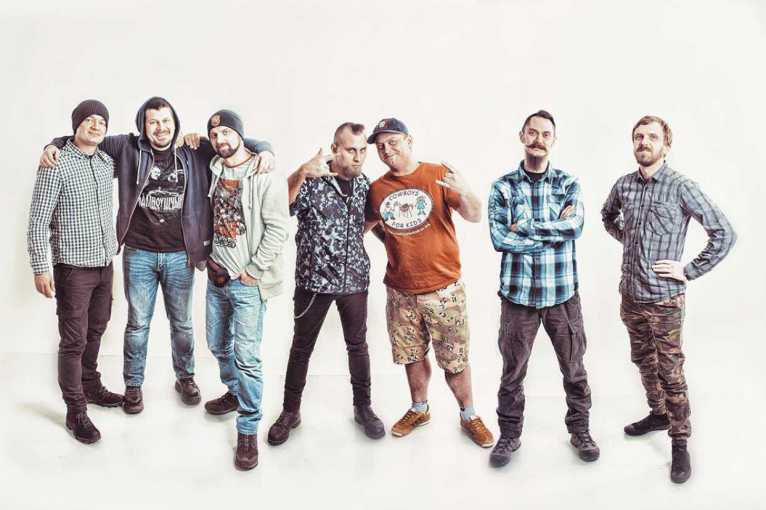 Dzieciuki + No Logo + Do Góry Nogami

Dzieciuki was founded in Grodno in 2012 from musicians from various undergrund formations. They have three albums Haradzieński Harmidar (2014) and Recha (2016), Radyjo Harodnia (2019). Most of the texts deal with the history of Belarus. The band uses every opportunity to play for their fans in Belarus, but for various reasons it is often impossible. That is why they play abroad more often – they have concerts in the Czech Republic, Austria, Slovakia, Hungary, Germany, Lithuania, Ukraine, Latvia and of course in Poland. They have already played about 50 concerts in our country. Their interpretation of the song by Jerzy Filas Black Bread and Black Coffee, as well as the song from the last album Tadevuš Kasciuška echoed here quite widely. Dzieciuki together with the Krakow group Hańba created the project Hańbuki.

No Logo is an alternative reggae band, funky, ska with elements of hard rock, coming from the small town of Sejny. The band has been around for 10 years and gives a lot of positive energy at their concerts. So far, several songs have been registered, in one of them (Hańcza) voice and heart was lent by Maria Sadowska. Musicians play in many projects, among others with Maria Sadowska or LIROY, the concert experience makes the band captivate with energy and is always full of energy and ripping during concerts. No Logo songs are broadcast on the antennas of radio stations – Campus, Radio Białystok, Radio Wnet and, among others Radio 5, Radio Rock.

The band Upside Down was founded in Olkusz at the turn of 2013 and 2014, although his idea had sprouted in the head of bassist and vocalist Maciek Fert a few years earlier. Consistently following the DIY path, the group began to work on increasing recognition. Olkusz inhabitants remain faithful to the tradition of old school Polish punk rock, but they successfully enrich it with the rock rhythm of roll’n’roll or quite noise or progressive arrangements. Punk by DGN is still music of opposition. A summary of the first stage of DGN’s activity was the album Do Góra Nogami, made and released at its own expense in 2016. The album was noticed by the media, and the band began touring even more intensively. After the second guitarist joined the composition of DGN in November 2017, the music gained weight, and at the same time more space and space for further experiments appeared in it. The effect can be heard on the second album Ultra, which went on sale on September 13, 2019 through the label Lou & Rocked Boys.