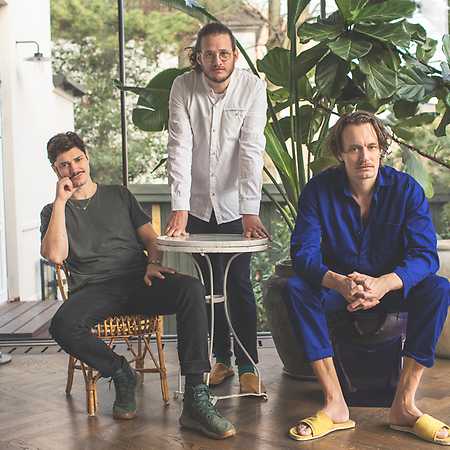 Efterklang is a Danish band based in Lisbon and Copenhagen. The band consists of the 3 childhood friends Mads Brauer, Casper Clausen & Rasmus Stolberg. They are signed to British label 4AD and released their 4th album ‘Piramida‘ on September 24th 2012. On November 4th 2016 they released the opera album Leaves – The Colour of Falling on Danish label Tambourhinoceros. The opera is co-composed with Karsten Fundal and features lyrics by Ursula Andkjær Olsen.

The band are co-founders of the internet radio station The Lake and the connected festival Badesøen Festival. Efterklang also has a history with filmmaking (The Ghost of Piramida by Andreas Koefoed & An Island, is their collaborative film with Vincent Moon) and they also used to run the tiny, but prolific label Rumraket. On 28th February 2014, the band performed a unique concert together with Sønderjyllands Symfoniorkester (South Denmark Philharmonic), Sønderjysk Pigekor (South Denmark Girls Choir), Hans Ek (conductor) and a string of special guests. It was named The Last Concert and it featured songs from their entire discography as well as unreleased and so far unknown Efterklang songs.

They called it The Last Concert, but Efterklang are indeed still around and busier than ever. On January 10th 2019 they announced that after a 6-year absence, Efterklang will return on September 21st 2019 to play an exclusive concert at Hamburg’s iconic Elbphilharmonie as part of Reeperbahn Festival.