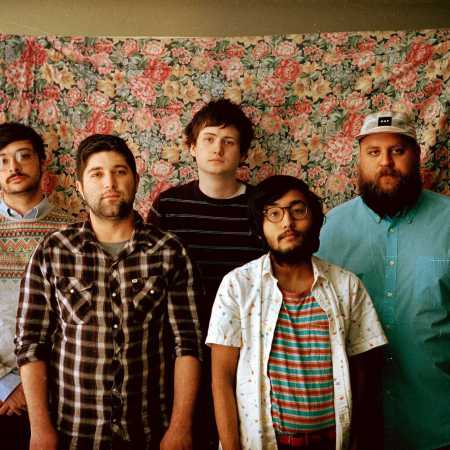 Foxing is an American indie rock band from St. Louis, Missouri. The band has released three studio albums and an EP, as well as a pair of splits and a single. Known for a theatrical style of introspective indie rock, Foxing brought together active members of the St. Louis, Missouri music scene in the early 2010s. With backgrounds that included post-rock, emo, and math rock bands, they expanded upon guitar-oriented fare with orchestral instruments beginning with their full-length debut, 2013's The Albatross. Led by singer Conor Murphy, Foxing formed in 2011 after the dissolution of Hunter Gatherer, a post-rock project, including members like bass player Josh Coll and drummer Jon Hellwig. Foxing issued an EP titled Old Songs in 2012. Their debut LP, The Albatross, arrived in 2013 on indie label Count Your Lucky Stars Records, and had strings, saxophones, and brass fleshing out their lush guitar palette. The lineup of Murphy, Coll, Hellwig, and guitarists Eric Hudson and Ricky Sampson soon signed with Triple Crown Records, which released the band's second full-length in 2015. In 2017, Coll left the group to focus on filmmaking, and Murphy released a self-titled album under the solo moniker Smidley. With producer Chris Walla on board, the group reconvened as a four-piece for its third album, Nearer My God, also issued by Triple Crown.