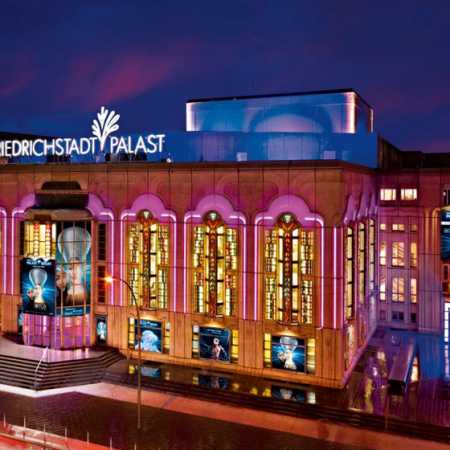 Friedrichstadt-Palast is a revue theater built in 1984 in the Berlin district Mitte, located approximately 400 meters north of the Friedrichstraße station, directly in Berlin’s amusement center.

A lot of internationally famous artists have played at the Friedrichstadt-Palast, among them Marlene Dietrich, Louis Armstrong, Ella Fitzgerald and Joe Cocker. Since 2008, a row of show productions have been performed, e.g. The One or Vivid. Besides, the building is used for events like award ceremonies or fashion shows.

The new building which replaces the old Friedrichstadt-Palast that was closed in 1980 appears oriental as the construction plans have their origin in a design for a culture palace at Damaskus.