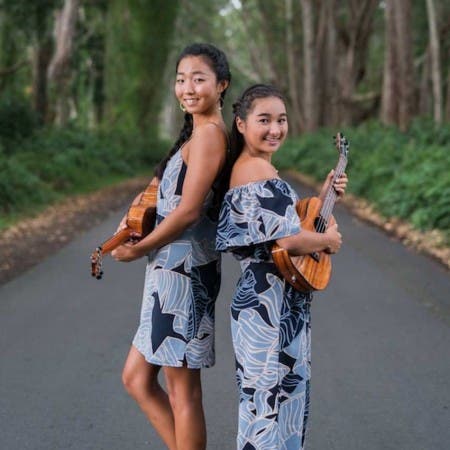 Honoka & Azita is a ukulele musical duo from Hawaii, United States known for the fast fingers and unique arrangements of popular and original songs. Internet sensations and ‘ukulele phenoms, Honoka & Azita are taking the world by storm with their dynamic and energetic performances. These social media superstars have amassed millions of views and have a growing fan base across the globe. These young ladies are the 2013 International ‘Ukulele Contest Grand Champions and were awarded the prestigious title of MVP. In 2015, the girls recorded on the Island Style ʻUkulele 2 album, which received the 2015 Na Hoku Hanohano Award for Compilation Album of the Year. The dynamic duo released their self-entitled EP album in 2016, which debuted at #1 on the iTunes Top 100 World Music Albums Chart and are currently in the studio recording their highly anticipated full-length album set to be released in 2018. Honoka & Azita are honored and humbled to team up with Kanile’a ‘Ukulele and look forward to sharing their music and aloha with the world. They have traveled to Japan, Czech, New Zealand, Niue, Austria, and most recently performed in the Los Angeles International Ukulele Festival and the Saleforce Dreamforce 2017 Conference in San Francisco. The duo has opened for International acts including 5 time Grammy Award winner singer/songwriter James Taylor, One Republic, The Wailers, MAGIC!, and Jimmy Buffett. Honoka & Azita supports charitable organizations like Make-A-Wish Hawai’i and often visit hospitals, care homes, shelters, orphanages and schools sharing their gift of music and hope.