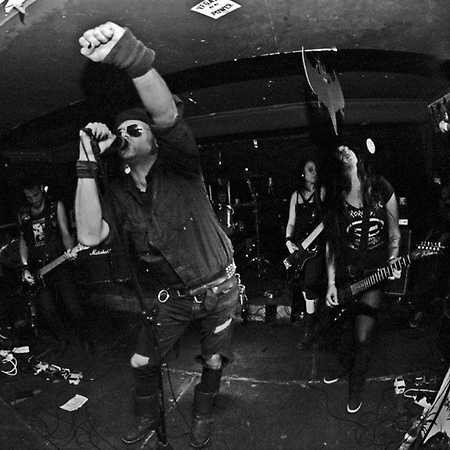 Horror Vacui formed in 2010 as the usual bunch of friends. They were – and still are – already playing in other bands with different genres and duties.

In 2011 Horror Vacui released the demo Black Rivers on their own label Legion Of The Dead. In 2012 they recorded a 7” Can You Still See Reality? and the first LP In Darkness You Will Feel Alright, for Legion Of The Dead, Avant! Records, HPGD and Agipunk. The first tour took them to Spain and West Europe in December 2012 and January 2013. Then, several tapes and represses followed. In 2014 Horror Vacui left for the first USA tour which was a big experience for the band and the new LP Return Of The Empire saw the light for Avant! Records and Agipunk. Then the second European tour happened.

Soon before recordings, Horror Vacui faced the first internal line up change since the beginning. The band is now consisting of Koppa, Marziona, Andrea, Fabrizio and Mesca.