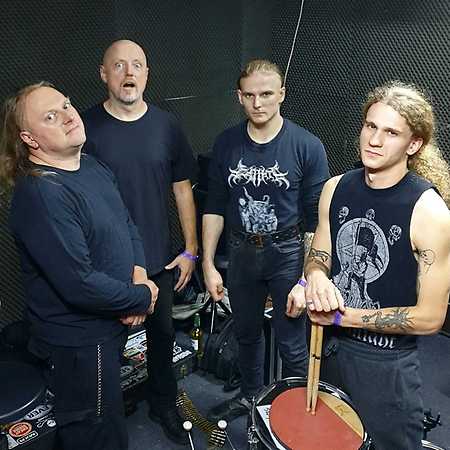 Łódź's Imperator is one of those bands that had a huge impact on the underground metal scene. Not only in Poland. Releasing Bariel's band's material was something even Euronymous from Mayhem himself was interested in (he was to appear in his Deathlike Silence Productions). Specifically, the only long-playing Imperator disc "Time Before Time". Who knows how the story of the group would have gone if it were not for the tragic death of the Norwegian at the hands of Varg Vikernes. Bariel (Piotr Tomczyk) founded the band in 1984. Imperator was inspired by the achievements of Hellhammer, Celtic Frost, Bathory, Venom, Sodom, which was heard on the band's first demos - "Endless Sacrifice" (1986), "Deathlive" (1987) and "Eternal Might" (1988). The last of these three was rereleased in 2018 on vinyl in a version remastered by Bariel with graphic design by Mentalporn. The mentioned "Time Before Time" album dates from 1991. Not long afterward, Imperator abdicated, and later several attempts to reactivate the band were short-lived. The final period of existence of the band sums up to a certain extent the bootleg "Live in Tarnów 06.12.91", which, in 2016 was released in limited quantities thanks to Thrashing Madness.