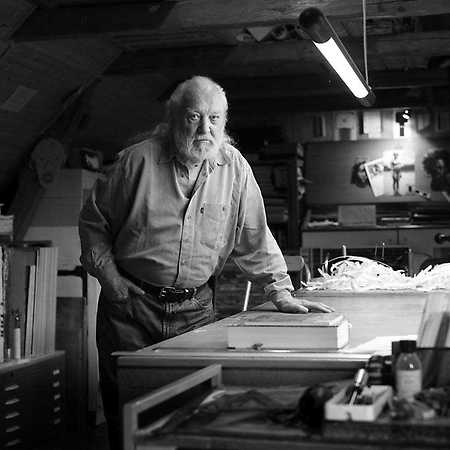 Graphics is one of many art disciplines, which has not yet enjoyed full recognition within Czech free art. In spite of that, or perhaps because of it, the work of Josef Hampl within the Czech-Slovak context is exceptional since it crosses over the boundaries of this medium although it is partially based on it. In a similar way, he draws from the possibilities of collage, gesture painting, sculpture or tapestry. Josef Hampl never studied at any art school and during the 1950s he was forced to work in heavy industry despite his effort to work in his father’s tailor workshop. However, in addition to working in Poldi in Kladno, he also worked in Pragovka in Vysočany in Prague where there was a high concentration of Czech intellectuals and where Hampl met and became friends with Vladimír Boudník. At the same time the factories had art studios where it was possible to work on one’s own projects and meet other creative co-workers. For Hampl’s artistic expression the key influences were, rather than the introduction to Boudník’s structural graphics, Boudník’s later experiments with pieces of fabric and printed thread, as well as the subsequent meeting with Jiří Kolář. Kolář, who, for a long time, had been perceived as a poet even by his closest circle of friends, made collages and drawings already during the 1950s which he enhanced in the 1960’s by textiles, among other things. Josef Hampl did not start working with stitched collages until the beginning of the 1980s primarily because, as he himself admits, of health reasons – when he could no longer fully handle sculpting work. Hampl’s “stitched graphics” grow to human dimensions and remind of the increasingly valued and popular artistic tapestry widespread in Czechoslovakia since the 1970s the representative of which included Hampl’s peer Bohdan Mrázek among others.