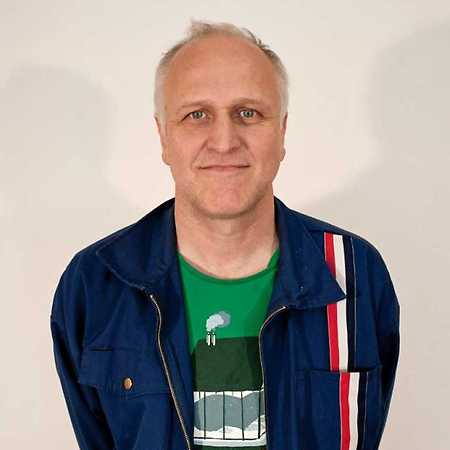 Karl Heinz Jeron is a German artist from Berlin who has been thematizing the informational society and new media since the end of the 1980s.

With Handshake, an internet art work realized in the early 1990s in collaboration with Barbara Aselmeier, Joachim Blank and Armin Haase and Internationale Stadt, the probably most prominent project of the German Interner scene, Jeron co-created the beginnings of internet art.

Using the possibilities of transmodal media aesthetics, he develops thought experiments as an artistic mean of expression. By developing an open source software further, he developed Sim Gishel, a robot that can sind Terry Riley's In C through vocal sythesis and sound modulation, in 2013.

With Space Time he presented a work dealing with digital synaesthesia and space-time-infrasturcture in 2016. By making time deviation audible time becomes experienceable.

In his post-internet installations called Hypothetische Maschinen animatronics recite a chopped narration from social media. The works give an unusual perspective on the culture of datafication.