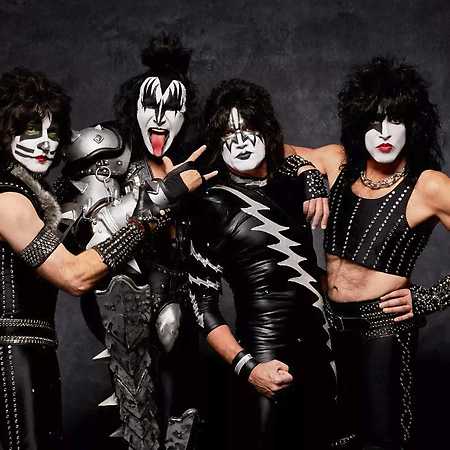 Rooted in the campy theatrics of Alice Cooper and the sleazy hard rock of glam rockers the New York Dolls, Kiss became a favorite of American teenagers in the 70’s. Most kids were infatuated with the look of Kiss, not their music. Decked out in outrageously flamboyant costumes and makeup, the band fashioned a captivating stage show featuring dry ice, smoke bombs, elaborate lighting, blood spinning, and fire breathing that captured the imaginations of thousands of kids. But Kiss' music shouldn’t be dismissed – it was a commercially potent mix of anthemic, first-pounding hard rock driven by sleek hooks ad ballads powered by loud guitars, cloying melodies, and sweeping strings. It was a sound that laid the groundwork for both arena rock and the pop-metal that dominated rock in the late 80’s. They have over 20 gold albums and over 80 million albums sold.