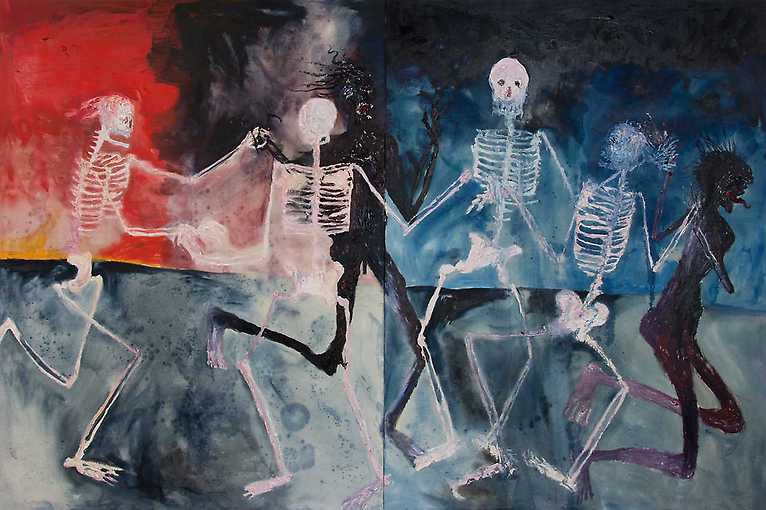 Konrad Żukowski: I keep smoking and waiting for everything to burn down

Partly out of boredom. For pleasure. Against easy ignorance. For money and prestige. To escape from banality. To kill time. Not to get out of practice. By the unattractiveness of the alternatives. A little for fun and to lift the spirits. To unwind. Out of need. For lack of other choices. Because it came up somehow. Through the jumble of thoughts and ideas. By chasing dreams. Affected by the charm of art. Contrary to the artistic circles. In a natural impulse. Out of sensitivity. To break the routine. As part of continuous self-improvement. Because he likes it. Żukowski doesn’t smoke any more. He paints.The artist’s works reiterate the themes from the repertoire of medieval painting, surreal visions, feverish dreams or nightmares. Not intentionally. “Out of his head”, as he would say.

In the darkness of Żukowski’s canvases, as if in the depths stretching under the closed eyelids, we can see skeletons dance. From the infernal flames human bodies appear – grotesque, mauled, and deformed. Creatures from fantastic bestiaries play. Dreams are also impregnated with scraps of everyday life, resemblances of the immediate environment. Skeletons and herds of horses, sexual fantasies, cheetahs and unicorns constitute a form of dreaming, and paradoxically also of vigilant insomnia that makes it easier to endure sometimes unbearable reality. The exhibition will present Żukowski’s latest paintings, in which he created new universes with impastos. He encapsulated some alternative realities in three-dimensional installations, cabinet-like altars erected for plastic deities. During the exhibition, the artist will again fill the walls of the gallery with a swarm of monsters and all living creatures, he will separate the brightness of the sheaves from the darkness of the paintings, and reality from sleep, leaving the viewer to indulge in the pleasures of dreaming.