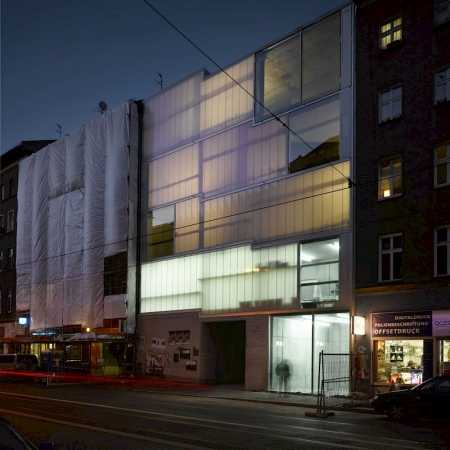 KOW opened in September 2009 at Brunnenstrasse 9 in Berlin-Mitte in a remarkable new building designed by Arno Brandlhuber that was constructed on the ruins of a failed investment from the early 1990s.

With a programmatic focus on the field of socially oriented art, the gallery’s exhibitions as well as its curatorial formats and publications aim to address a broad international public. Ten years after KOW inaugurated the new gallery at Lindenstraße 35, between the Jewish Museum and the high-rise of the Axel Springer publishing house.

KOW represents international artists from different generations, cultural backgrounds, and approaches to media who share the engagement with social realities and respond to political challenges with aesthetic consciousness. Artists such as Franz Erhard Walther, Barbara Hammer, Alice Creischer, Candice Breitz, Tobias Zielony, Renzo Martens, Michael E. Smith, Hiwa K and Chto Delat have made crucial contributions to the artistic discourse and created outstanding bodies of work supported by reputable institutions. Many of them had their first gallery exhibitions in Europe at KOW.

Since 2009 KOW is run by Alexander Koch (Berlin based curator and art theorist) and Nikolaus Oberhuber (former director of the gallery Nächst St. Stephan in Vienna) in collaboration with a growing team. In 2018 the gallery opened a location in Madrid.

Under The Mango Tree