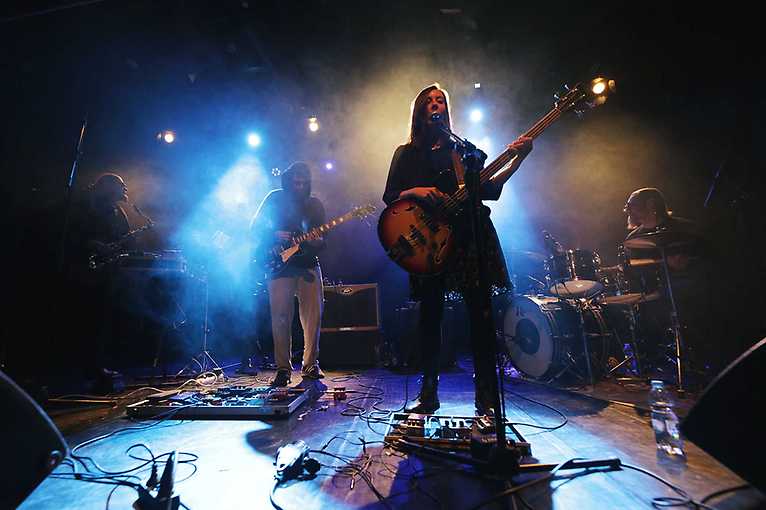 Lonker See concert at the RE club in Krakow.

Lonker See is a Tri-City quartet that first met in the recording studio in 2016. The result of this meeting is the band’s first album entitled Split Image released by MITW. Already on the first album you can notice what is most important for Lonker See – the sound and their own style of playing. This style is the result of the contact between four musical personalities of LS and the freedom with which the musicians play together. Joanna Kucharska (bass, vocals), Bartosz Boro Borowski (guitars) Michał Gos (drums) Tomasz Gadecki (saxophones) create together spatial music, which with its climate hypnotizes, intrigues and draws the listener into a wide spectrum of musical genres. This is music which cannot be described in one genre or word. One can hear space rock, psychedelia, jazz, free jazz or ambient here. Long forms full of improvised elements intertwine here with very specific melodies and decisive grooves, and the tension is built by skillful handling of dynamics and emotions. In 2018, Instant Classic released the album One Eye Sees Red, which was very well received nationally and internationally and sparked interest in the band at festivals and clubs abroad. LS played very well received concerts in Germany, Switzerland, France, Spain, Belgium and Holland. During the pandemic, the band set about creating new material, resulting in the band’s album Time Out - the title refers to the unscheduled break, which caused reevaluation, creative brainstorming and searching for new ways to make music.