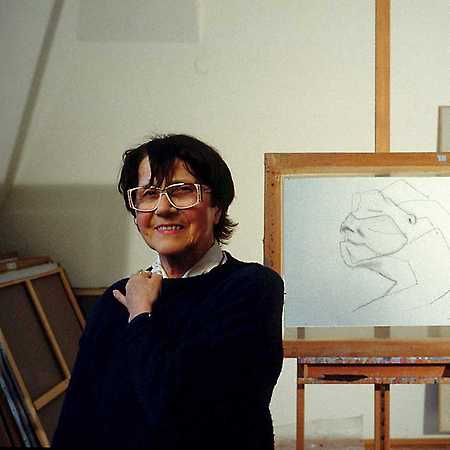 Maria Lassnig was an Austrian painter known for her psychologically expressive self-portraits, often rendered with a combination of turquoise greens and saturated magentas. Lassnig’s work explores “body awareness” using distorted or exaggerated features to depict internal sensations and feelings. An artist with a career spanning over 50 years, Lassnig only began to receive international attention when she was well into her 60s, garnering major exhibitions and the admiration of contemporary painters such as Dana Schutz. Her work was notably the subject of a retrospective in 2014 at the MoMA P.S.1 museum in Queens, NY. Born on September 8, 1919 in Kappel am Krappfeld, Austria, she went on to attend the Academy of Fine Arts in Vienna during the Second World War, moving to New York to study animated film in the early 1970s at the School of Visual Arts. The artist died on May 6, 2014 in Vienna, Austria at the age of 94. Today, Lassnig’s works are in the collections of The Museum of Modern Art in New York, the Essl Collection of Contemporary Art, and the Museum Ludwig in Cologne, among others.