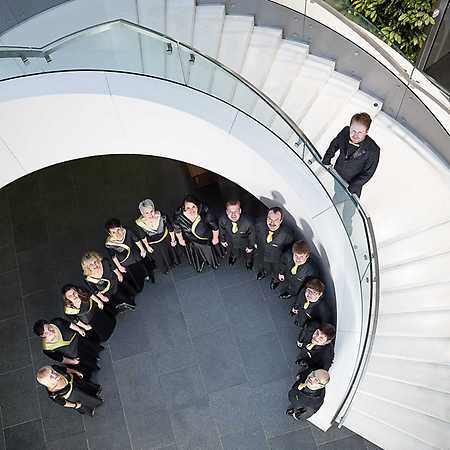 The Martinů Voices chamber choir was founded in 2010. Its programming focuses primarily on music of the twentieth and twenty-first centuries, but it does not avoid earlier style periods, especially the Renaissance. The name of the great figure in Czech music of the twentieth century in the choir’s title refers to the fact that it devotes a major portion of its attention to modern Czech composers. The choir was established by and still works under the leadership of Lukáš Vasilek. It appears both independently and in collaboration with other performers, chamber ensembles, and orchestras, giving concerts both at home and abroad including guest performances in the most important music festivals such as Prague Spring, Strings of Autumn, Concentus Moraviae, and the St. Wenceslas Festival. Its performance of Bohuslav Martinů's opera What Men Live By brought it a nomination for a prestigious International Opera Award. The ensemble has recorded four compact discs to date, of which the most important, featuring choral music by Jan Novák, was issued on the Supraphon label in 2014.