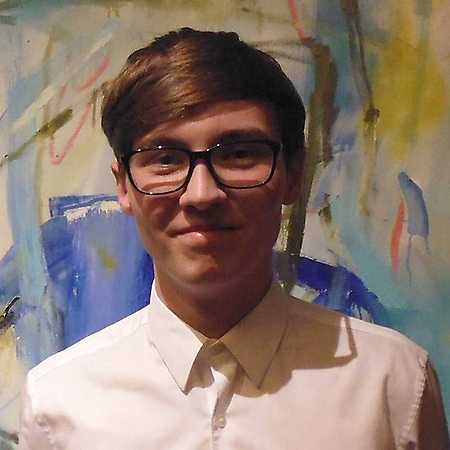 Matyáš Maláč is a student of the Academy of Fine Arts in Prague in the Studio of Painting II. under supervision of Vladimír Skrepl and Jan Šerých.

The 2018 series of paintings called Chemtrails is a symbolic immersion into the depths of virtual reality. The fluidity and apparent plastic surface of the shapes remind us of inanimate digitized objects escaping any closer determination. On the other hand, these flowing lines merge into organic structures pervaded to the surface by washed-out texts of English phrases. This series can be seen as the imaginary ending of a several-year-long creative expression that has evolved from a series of intuitively emerging dry pastels. Together with Julius Reichel and Namor Ynrobyv, Matyáš Maláč created several joint exhibitions, where his work gradually evolved from pop gaming fluidity to less graspable shapes and colors based on more refined bases.

Maláč's latest work balances on the edge of the object and with its relief character ceases to respect the two-dimensional limitations of the classical image. The non-graspable clusters of materials together form a bonded mass of indeterminate ready mades, whose original purpose we just imagine under the rubberized surface. In contrast to the previous series of gaming-inspired Chemtrails images, natural motifs and VR, these expanded paintings are more descriptive, but at the same time we know that their testimony is far more critical. Web memes mingle and layer with collages of texts and photos, quotes from contemporary mythology, dried organic material, shaved hair or encrypted character text. All this reminds of sarcastic tribal objects parodying the cult of self-loving-intellectual-geek-like contemporary pop culture. At the same time, however, we have some kind of playful ominity which have these works somewhere encoded.