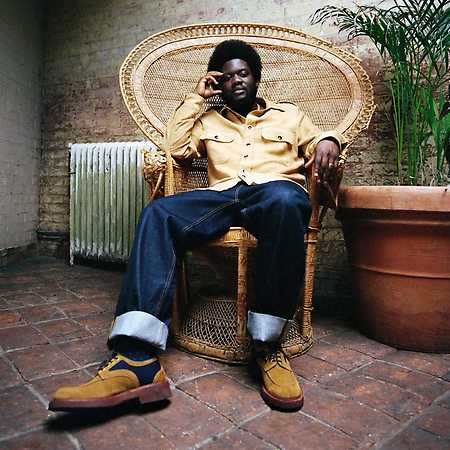 Grown up in the north of London, Michael Kiwanuka first took to the guitar at the age of 16 and composed his own rock songs. It was only by accident that the Briton with Ugandan roots stumbled over an old acoustic recording by Otis Redding in an enclosed CD of a music magazine, which was to decisively change his musical career.

The record deal came in 2011, and shortly thereafter the first two EPs Tell Me a Tale and I’m Getting Ready were released. These alone were enough to win the BBC Sound of 2012 a year later and to accompany superstar Adele on her European tour as support.

With Home Again released Michael Kiwanuka 2012 his first album, which made it in the UK with gold status in fourth place of the charts and 17th place in the German charts. Overwhelmed by the huge success, he retired almost completely from the public after the debut album. But fortunately for all Soul fans, he marked 2016 with Love & Hate – an album with a huge sound spectrum. While the debut album was still characterized by acoustic soul-folk, on Love & Hate dominates an opulently arranged old school soul. The nearly ten-minute opener Cold Little Heart alone takes almost half of the song time to harmonize guitar, piano, strings and choirs before the deep voice is heard. Not long ago, Money was released – his first new single since the last album, where he teamed up with another soul music innovator, producer Tom Misch. The song surprises with a casual 80s disco vibe.