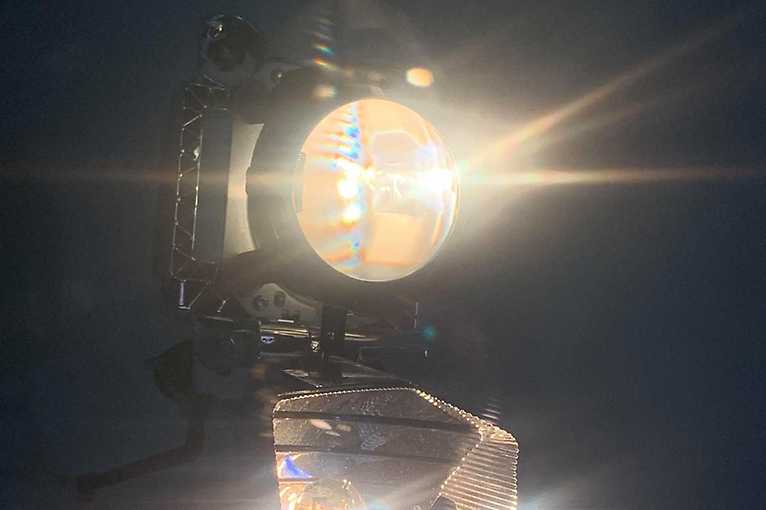 Michael Matejko’s exhibition at the wandering Death of Man Gallery, this time at 5 Lelechowska St. The opening is part of the programme of this year’s Warsaw Gallery Weekend.

The axis of Michał Matejko’s practice is experimenting with physical phenomena. The exhibition is the result of over two years of observing illusory phenomena. One of them is the situation in which a perceived object is closer to the observer than it might seem. Illusion becomes in this case a specific poetry of the moment. By splitting light, the author deforms the image of objects. He deprives them of their original practical functions and subordinates them to the rules of composition. Maintaining strict aesthetic discipline, he transfers utilitarian objects to the isolated gallery space and uses them to construct his own order.

The light of a flash hits the mirror surface of a car reflector too fast for the human eye to register. If one were to slow down that fraction of a second, one could see the light spilling over the folds, grooves and curves of the laminate. You could see dozens of images. Some of them could be captured on the camera’s sensor, fixed and enlarged. Here is a stop in the loop of events: light – reflector – creator – matrix – matter – viewer. The creative process works like a mirror in front of which there is another mirror. An inscription is placed on a car mirror: objects in a mirror are closer than they appear. This simple remark informs us of the imperfection of the perception process. The consequence of being aware of the error is fear and the desire to avoid it. To see more. Step back – step forward – step back: a loop. Is there freedom in the loop? The light almost begs for attention, creates forms inviting contemplation. Enchantment with a form is addictive. The artist processes, tames the untamed, registers, organizes. However, he is always torn between what he sees and what he would like to see.