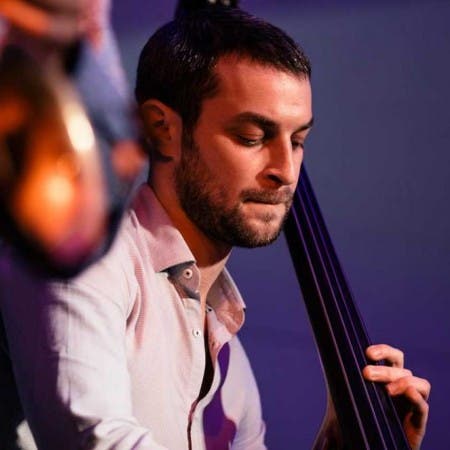 At the age of 27, Mike Parker has already toured all over Europe and America with both jazz and rock bands, won several international contests and awards, studied with and played with some of the greatest musicians alive, and recorded 2 albums of his own compositions. A native of New York, Mike began playing music seriously at the age of 14 when his older brother, also a musician, put an electric bass in his hands. By the time he was 17, he was leading his own band, playing funk and rock gigs in New York City clubs, and teaching private music lessons. Around this time, Mike began playing the double bass after being inspired by the music of Charles Mingus and other jazz greats. Mike attended Skidmore College where he studied Evolutionary Psychology and Music and spent a semester abroad studying Jazz Bass at the Conservatorium van Amsterdam. While studying at Skidmore, in addition to playing in orchestra, string ensemble, big band, small jazz ensemble, and working on his own musical projects, Mike began playing professionally with the school’s professors and the area’s best veteran jazz musicians. He also had the opportunity to study with some of the world’s greatest bassists (Scott Colley, Reid Anderson, Reubin Rogers) and perform with some of the world’s greatest jazz musicians including John Scofield, Chris Potter, and Eric Harland.

Upon graduating with Highest Honors in 2010, Mike received the Joseph Garrison Parker Prize for excellence in both science and the arts and was given a Periclean Award for his outstanding senior project, a concert featuring both free improvisation and original compositions. After graduating, Mike spent a year in New York’s Capital Region playing with the area’s best musicians, including as a member of the Brian Patneaude Quartet (Metroland magazine poll’s ‘Best Jazz Group’ 2009-2011), and recording his first album as a leader (‘Prelude’) before deciding to move to Europe. After traveling extensively around the continent Mike settled in Krakow, Poland where he discovered a young and vibrant jazz scene. Over the next two years, Mike had many fruitful collaborations there, including recording his second album of original material (‘Embrace the Wild) and winning 2 international jazz contests (2012 Tarnow International Jazz Competition and the 2012 Jazz Juniors International Jazz Competition) as a member of N.S.I. Currently, Mike calls both New York City and Krakow home when he is not on tour. He performs on both upright and electric bass as a member of several touring groups including the ‘Nat Osborn Band’, ‘Arctica’, and his own ‘Mike Parker’s Unified Theory’ and ‘Mike Parker’s Trio Theory’.