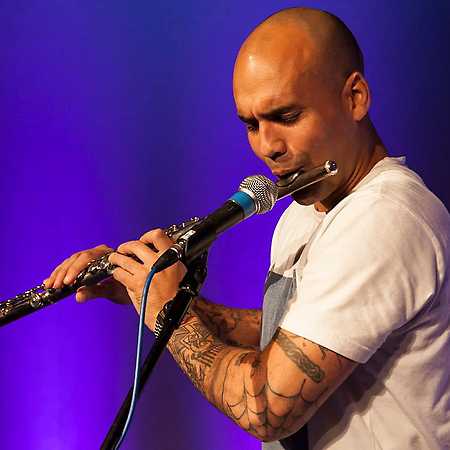 Incorporating his dynamic trademark 'Fluteboxing' — simultaneously playing the flute whilst beatboxing — Nathan's futuristic style is a fusion of hip hop, dubstep and drum & bass beats, blended with jazz, funk, and hypnotic Eastern melodies. He has established himself as a 21st Century pioneer of his art form, with his breathtaking, high-octane live performances, leading Arena Magazine to rank him number 18 on their list of the '100 Coolest Things on the Planet'.

Equally at home playing a sell out show at the Purcell Room or the prestigious Southbank Centre in London, as he is gracing the stage with a number of highly respected and well established acts, Nathan has collaborated live, and in the studio with legendary artists including; The Prodigy, Plan B, The Roots, Asian Dub Foundation, DJ Sander Kleinenberg, Nitin Sawhney, Beardyman, Guru, Speech Debelle, K.T. Tunstall, Foreign Beggars, Natty, Rodney P & Skitz, Mattafix and Ed Rush & Optical.

He is an established UK Festival performer, having appeared at Glastonbury, Bestival, Womad, Grassroots, and Larmer Tree to name a few. He has also taken his Live Show to throughout Europe, the Middle East, Asia, and more recently to India.

2011 saw a landmark for Nathan and his band The Clinic, with the release of their debut Flutebox EP to critical acclaim. His band, The Clinic, is an ever evolving collective of outstandingly talented musicians, a dynamic tribe of artists who combine to produce an explosive and unique act.

Being involved in the Jungle scene in the early 90s as Jungle MC playing on the legendary pirate radio station Kool FM, Nathan was already well versed in performing. After leaving school and working as a labourer, Nathan was by chance given a flute by a good friend who encouraged him to take it up. Inspired, he taught himself to play, then fusing his new found love of the flute with his 'Old Skool' beatbox style and his unique brand of Fluteboxing was born.