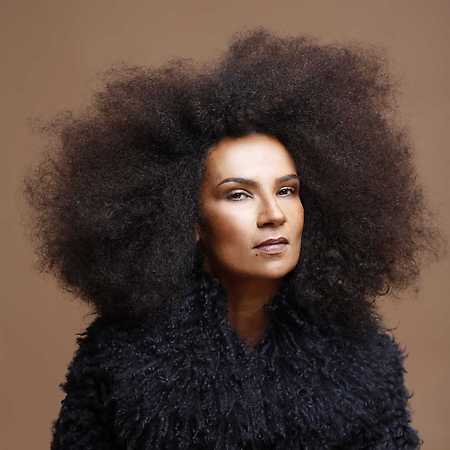 Originally from Casablanca, Oum El Ghaït Ben Essahraoui was expected to become an architect; however, she chose to pursue a career in music. She quickly caught the attention of the media, who identified her with Nayda, a movement of young Moroccans centered around more urban rhythms. The albums Lik’Oum (2009) and Sweerty (2012), which were only released in Morocco, made her a star in her home country. It was then that a remarkable idea came into her head. She started writing in darija, a dialect of Moroccan Arabic that she uses every day. This gave her the opportunity to add a new musicality to her lyrics, as well as new combinations of meaning – indeed, a whole poetry of assonance. In 2013 she teamed up with other great musicians to release her first international album, Soul of Morocco. European audiences had the opportunity to discover an artist who generously presented a new kind of fusion combined with great authenticity. Numerous concerts allowed her well-knit band to achieve even greater cohesion. Two years later, the album Zarabi, recorded at the gates of the Sahara, further deepened the aesthetic direction taken by Oum, while addressing the need to preserve nature and traditional micro-communities.

Her third album, Daba, was released in 2019. Entrusting the artistic direction to Palestinian poet-singer Kamilia Jubran, Oum traveled with her musicians to Berlin, where she recorded an atmospheric and danceable album. For Oum, this dual purpose reflects a kind of state of exception in a positive sense: especially nowadays, when means of communication and transportation radically change our experience of the world and each other, being together, sharing good moments, dancing and giving warm hugs to everyone seems to be a necessity. The album’s themes, expressed through poetry that is economical with words and devoid of embellishment, are in line with the general interests of its creator: humanism, feminism, spirituality and the importance of reconnecting with nature. Daba, in Moroccan Arabic, means Now. This title of her third album signifies for Oum the connection between past experiences and the present. Now the singer, who has reached a certain artistic maturity, is able to combine traditional Arabic and Saharan elements with discreet borrowings from more contemporary aesthetics – soul, jazz and electronic trance. In this way, her music flourishes, as do her thoughts as a woman anchored in secular spirituality and open to today’s world. Oum considers herself Moroccan, African, and a woman of the world, and is convinced that cultural differences are less important than the elements that unite us. And with that she touches on spirituality. After all, isn’t Abad, i.e. “the eternal” the opposite of Dab, i.e. “the moment”? With this album, Oum continues his search for universal music that is both a reflection of a troubled world and a balm to soothe the pain and give unwavering hope.