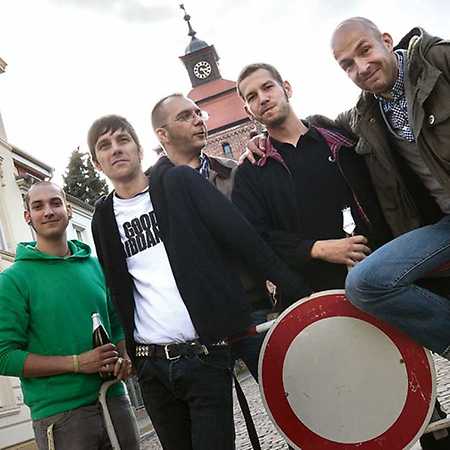 Oxo 86 are a German Oi! and ska punk band founded in 1995. In 1996 they released their first tape Sex, Fleisch und Alkohol. Meanwhile, they can look back on a discography with fifteen albums, tapes and compilations.
The album Kommen, seh’n und singen (2009) was produced by their own label BernauPunkrockLeague.
Socio-critical topics also find their way into their music. For example, the song Der Preis ist heiß revolves around nationalism and Hören-Sagen around the prejudgement of subcultures. This is reflected not only in a number of their releases but also in the fan campaign ‘Oxo 86 Fans gegen Faschismus’ that was started at the end of 2009.
Furthermore, the five members, all from Brandenburg, founded the half-acoustic side project Trink- und Sing-Gemeinschaft in 2013 to pay homage to the ‘real’ football fandom.