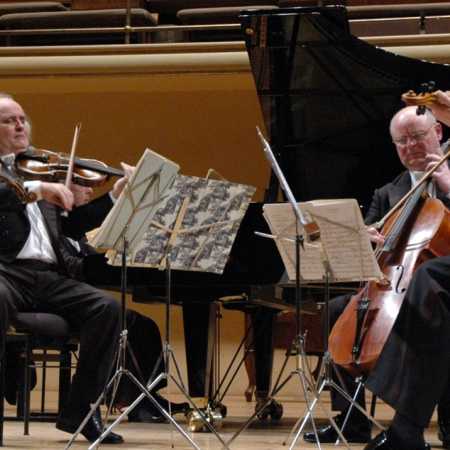 Panoch Quartet is a string quartet playing in classical cast: 2 violins, violins and violoncello. The history of the ensemble dates back to 1966, when a trio composed by Jiří Panocha (violin), Jaroslav Hlůže (violin) and Jaroslav Kulhan (violoncello) was founded under the leadership of Josef Mika, teacher of the Prague Conservatory. In 1968 the violinist Pavel Zejfart (2nd violin) was added and the ensemble got the current name of Panoch Quartet after the Primary, Jiří Panoch (1st violin). After graduating from the Conservatory, they moved to the Academy of Performing Arts in Prague, where they studied chamber music under the direction of Antonín Kohout.

The Panoch Quartet joined a number of internationally acclaimed quartet ensembles and is regarded as a dignified successor of the Czech interpretation tradition. The Quartet performed in almost all European countries, most often hosting in the UK. In the United States, North America was more than 30 times, in Japan 20 times. They were also invited to international music festivals (Edinburgh, Salzburg, Dubrovnik, Tel Aviv, Kuhmo, Kusatsu, Mondsee), and to concerts in Mexico, Cuba, Australia, New Zealand, Japan as well as to Prague Spring. The ensemble has had 70 to 80 concerts each year in recent years, out of which only 5 were in the Czech Republic.

For more than 40 years, the Panoch Quartet has recorded a plethora of LPs and CDs. Only Supraphon made about 100 recordings, which presents almost 40 hours of recording. In addition to Czech Panton records, they recorded their performances with more than a dozen foreign music record labels.

They recorded sets of quartets and quintets by Antonín Dvořák and Bohuslav Martinů and a great number of opuses by Leoš Janáček in cooperation with pianists Rudolf Firkušný, Jan Panenka, Martin Kasík or the Hungarian-British pianist András Schiff. They also often record works by German classics such as Joseph Haydn, Wolfgang Amadeus Mozart and Ludwig van Beethoven.