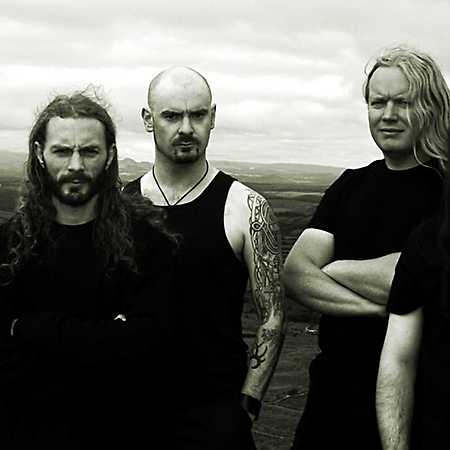 7:18 0 ×
Primordial  Where Greater Men Have Fallen

Primordial is an Irish Pagan Metal band from Skerries, Dublin. Next to Waylander and Cruachan they are said to be the founders of Celtic Metal. The group was formed in 1987 by bassist Pól MacAmlaigh and his brother Derek. Vocalist Alan Averill aka A.A. Nemtheanga joined the band in 1991 after seeing an advertisement for a singer in Dublin specialist Metal store The Sound Cellar. In 1993 the band recorded the demo Dark Romanticism for 50 pounds and sold over 1100 copies.
After a live soundboard recording from Dublin from 1994 was sent to Cacophonous Records the band signed with them for the release of their debut album Imrama.
The band’s fifth album The Gathering Wilderness turned out to be a much darker and bleaker record than any Primordial had made before, providing the listener with a rawer sound as well. It was chosen as album of the month in Terrorizer Magazine and appeared in many top lists of the year 2005. Primordial have toured with various Metal bands in the extreme Metal genre, including Norwegian Black Metal band Immortal.

Knives To A Gunfight