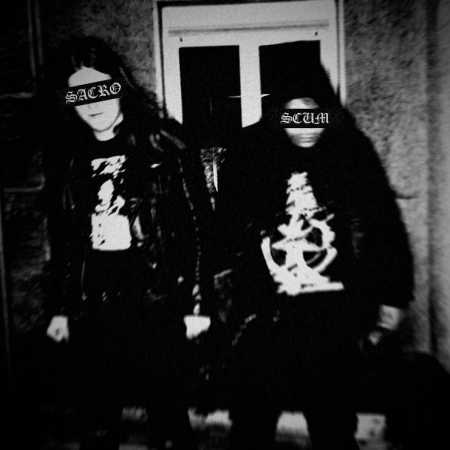 Sacroscum is a black metal and crust band from Memmingen, Germany. The abnd consists of only two members, drummer J. and guitarist, bassist and vocalist SS, who are both also active in other bands such as Niht.

The group was formed in 2015. After playing music together for a long time and trying to create something unique, the duo mixed influences of Darkthrone, early Celtic Frost, Discharge, Skitsystem, Inquisition, and everything they thought would be fitting.

The lyrics of the two self-proclaimed black crust death punks often involve topics like death or "human waste", but also dedication. Sacroscum has become a kind of philosophy for J. and SS hereby: Sacroscum can be music, a mirror, a judge, a knife but in the end also just whatever you want it to be.

Following a demo cassette from 2016 with the title Stillbirth, the long-awaited debut album, Drugs & Death, was released in autumn 2017 on the indie label Unholy Prophecies. The album was recorded at the band's rehearsal studio and mixed at Ruins Rust Studios in Southern Germany, so summed up it is also more of a DIY project – a successful one.