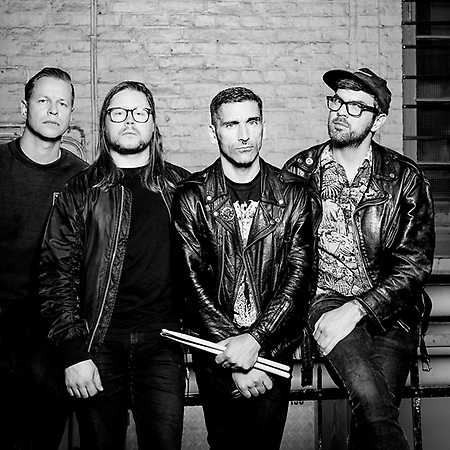 Satanic Surfers are a Swedish skatepunk band. The band was founded in 1989 by Rodrigo Alfaro and Erik Kronwall. After a few member changes the debut EP Skate to Hell was recorded in 1993. The band financed the first two productions of the CD themselves. These sold over 1000 times over the next few months. In 1994, the EP was re-released by the label Bad Taste Records. At the same time Burning Heart Records showed interest in the band as well. The second EP Keep Out, with the singer Ulf Erikson appeared on this label.

Before the first complete album appeared, there was a fundamental change in the band. The singer moved away and Rodrigo Alfaro, the drummer, took over the vocals. The following three albums were released on Burning Heart Records, especially Hero of our Time attracted attention with more than 60,000 CDs sold. The Satanic Surfers traveled through Europe, Australia, Canada and the USA, among others with the bands Lagwagon, Good Riddance and Millencolin.

The band combines distinctive melodies and fast punk rock rhythms with partly very personal but also political lyrics. Because of the lyrics that were very often about skating at the time, the Satanic Surfers were often described as skate punk bands. They were among the bands of the Swedish “punk rock explosion” in the mid-1990s. Early influences were bands like SNFU, RKL or the Misfits.