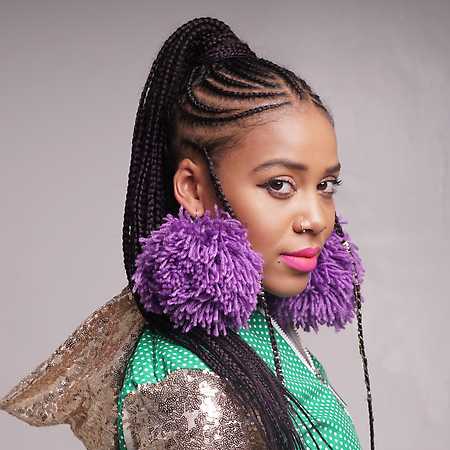 Maya Christinah Xichavo Wegerif (born 1992), commonly known by her stage name Sho Madjozi, is a South African rapper and poet. She is known for rapping in her native tongue Tsonga, and for her Swahili house hit single Huku. She has featured in Okmalumkoolkat’s Ngiyashisa Bhe and Gqi, as well as DJ Maphorisa’s Probleme and is an up-and-coming artist within the South African rap scene.

Wegerif was born in South Africa to a white father and black Tsonga mother, and grew up in Shirley, a mountain village in the Limpopo province. As a teenager, Wegerif spent several years living in Dar es Salaam, Tanzania. After finishing secondary school, she left for South Hadley, Massachusetts, United States to study African Studies and Creative Writing at Mount Holyoke College. Following this, she returned to South Africa and took up a fellowship in writing at the University of Johannesburg.

Wegerif’s early work was mostly spoken word, written under the alias MayaThePoet. Race, identity and politics play a common theme throughout her work, such as in her spoken word poem Sometimes it Pours. After her return from the United States, Wegerif started rapping under the alias Sho Madjozi, in collaboration with Okmalumkoolkat. She is significant for choosing to rap in Xitsonga, and states that it is important to her to remain true to the language.

Her fashion is an important element of her work, with her colorful and vibrant outfits matching the carefree style of her rapping. Madjozi achieved international exposure by her performance of Wakanda Forever with rapper YCEE at the Global Citizen Festival 2018 in Johannesburg.