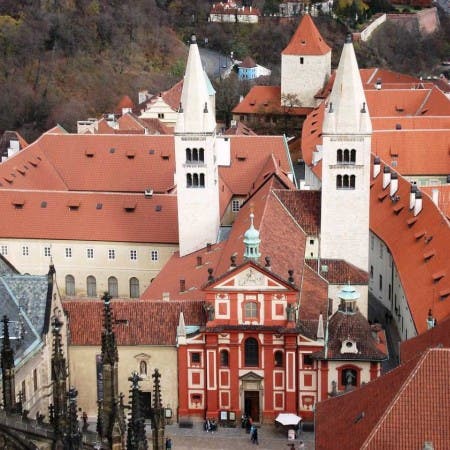 The convent, together with the Basilica of St. George, represents the oldest preserved church building of Prague Castle. The Romanesque Basilica was established before 920 on the initiative of Prince Vratislav I. The present form of the convent is the result of extensive repairs for Abbot Bertha, which was to be accomplished in 1145–51 after the siege of Prague Castle in 1142. Then the two typical high white towers of the Convent originated. Another significant reconstruction took place during the Early Baroque period when the basilica gained a distinctive facade, but at the beginning of the 18th century, the church was expanded by the chapel of St. John Nepomucky. After the abolition of the monastery by Joseph II. in 1782 the premises of the monastery served as barracks, and from 1975 it served as an exhibition hall of the National Gallery. After the object was given back in restitution to Roman Catholic Archdiocese of Prague in 2016, the convent has been under reconstruction and is not accessible to the public. In the future, however, it should continue to serve as a gallery.

Church of the Sacred Heart of Jesus