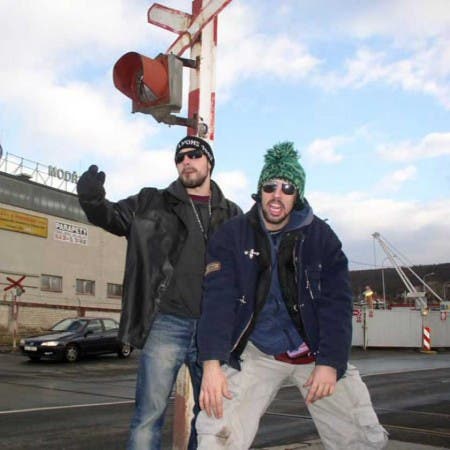 Stephunk T. is a Czech musician who has been creating music and performing live in many arenas around the world since 1990. During this time he has led various musical groups including Liquid Harmony. They were highly acclaimed in their time and toured all across Europe and the USA to great reviews. Their album Living in Liquid (Sony Music-S3) was the starting point for live electronic music in the Czech Republic (CZ Grammy Award 1997).

2012 is here and Stephunk’s production is still growing. We are preparing an audiovisual workshop along with Thames Valley University students, to bring multimedia closer to those who are interested in any type of audio and video creation.

In 1999, Stephunk T. moved away from Liquid Harmony and further into the world of production and re-mixing, and completed his studio in the heart of Prague to facilitate this.

At the end of the year 2000, Stephunk T. invited Radimo to help him launch the Stephunk T. Live project. In 2001, they toured across Europe including performances at many festivals and club shows from Prague to Amsterdam. After this period, the Stephunk T. Band secluded themselves in a cottage in the Jizera Mountains in the north of the Czech Republic to work on material for the download centre and upcoming shows. This culminated in a performance supporting the Stereo MCs in Prague (2nd Feb. 2003) and thus was born the Stephunk T. Live Band (drums, bass, brass section, scratch, MC and computer support).

In the beginning of 2005, Stephunk moved to London, and works as a composer and studio sound-engineer creating a new product created by London Marketing TM.

In March 2006, the UK edition of FutureMusic magazine gave praise to Stephunk T and released Dethrayboosterrocket as part of their readers' demo section in their monthly DVD.

Since 2003, Stephunk T. has supported, among others, StereoMCs, The Freestylers, Stanton Warriors and The Prodigy… What’s next? Who can say?