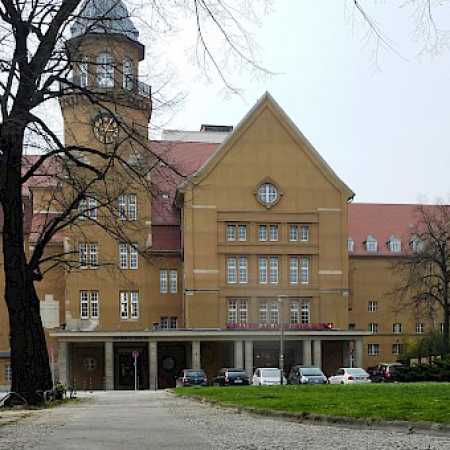 Theater an der Parkaue in Berlin-Lichtenberg is the biggest state theater for young people in Germany and an important part of the national and international kids’ and youth theater scene.

The program of the theater consists of old myths and legends, fairytales, modern texts, older plays and classics from 2000 years of literature that are presented in contemporary aesthetics as well as workshops and theater clubs. The focus lies thereby on opening theater for the life reality, opinion and interests of children and young adults. Dance and theater from different cultural environments and linguistic areas in coproduction with international partners are repeatedly presented at Parkaue.

The building, that was built in 2011 and reminds of Renaissance architecture, was mandated by the soviet government to be used for cultural purposes in 1948 and hosts for example also a cinema and a miniature observatorium besides the theater. Since 2005, Kay Wuschen is intendant of the first theater of the Berliner Bühnen that is made entirely for children and young people. the program is created for children from four years, school classes, youths and young adults as well as individual visitors of all ages.